The Future of Drug Development by Mark Jackson

Each of us reacts differently to medication. Our genetic differences mean that drug molecules interact with our bodies uniquely, resulting in variations among the effectiveness and side effects. On average, drug development takes 12 years and more than £1bn to develop each new medicine (ABPI Time to Flourish). Moreover, for every 10 to 20 medicines identified in the laboratory, only one will ever reach patients – the others will fail along the way. Once a potential drug candidate is discovered, it will be developed to maximise the benefit and minimise the side-effects for the population as a whole.

However, what if a computer could speed up the drug discovery process, making it more likely that the drug is effective and produces fewer side effects? What if it could even tailor the medicine for just one person, to maximise effectiveness and minimise reaction just for them?

Such computer-assisted drug discovery is possible with standard “classical” computers but such devices are quickly overwhelmed by the vast computational requirements even to tackle relatively small problems . Fortunately a new development is in the process of overcoming this limitation. Quantum computers are already beginning to contribute to the discovery of therapeutics, and over the next several years we may enter the era of personalised medicine.

The Problem With Current Drug Development

In 2020 the FDA authorised 53 drugs, the second-highest number in the past 20 years (A. Mullard). While this may seem like great news, the cost of such drug development has been exponentially increasing akin to an inverse Moore’s Law known as Eroom’s Law, and there has been a distinct lack of so-called ‘blockbuster drugs’ in recent years. Furthermore, biologics – drugs which are made from living organisms or contain components of living organisms – have been responsible for 93% of global net drug spending growth since 2014, with their exceptional therapeutic potential making them 22 times as commercially valuable compared to small molecules (S. Kozlowski et al. and F. Makurvet). Unfortunately, biologics also contain thousands of times more atoms making simulations with classical computers very difficult or impossible. 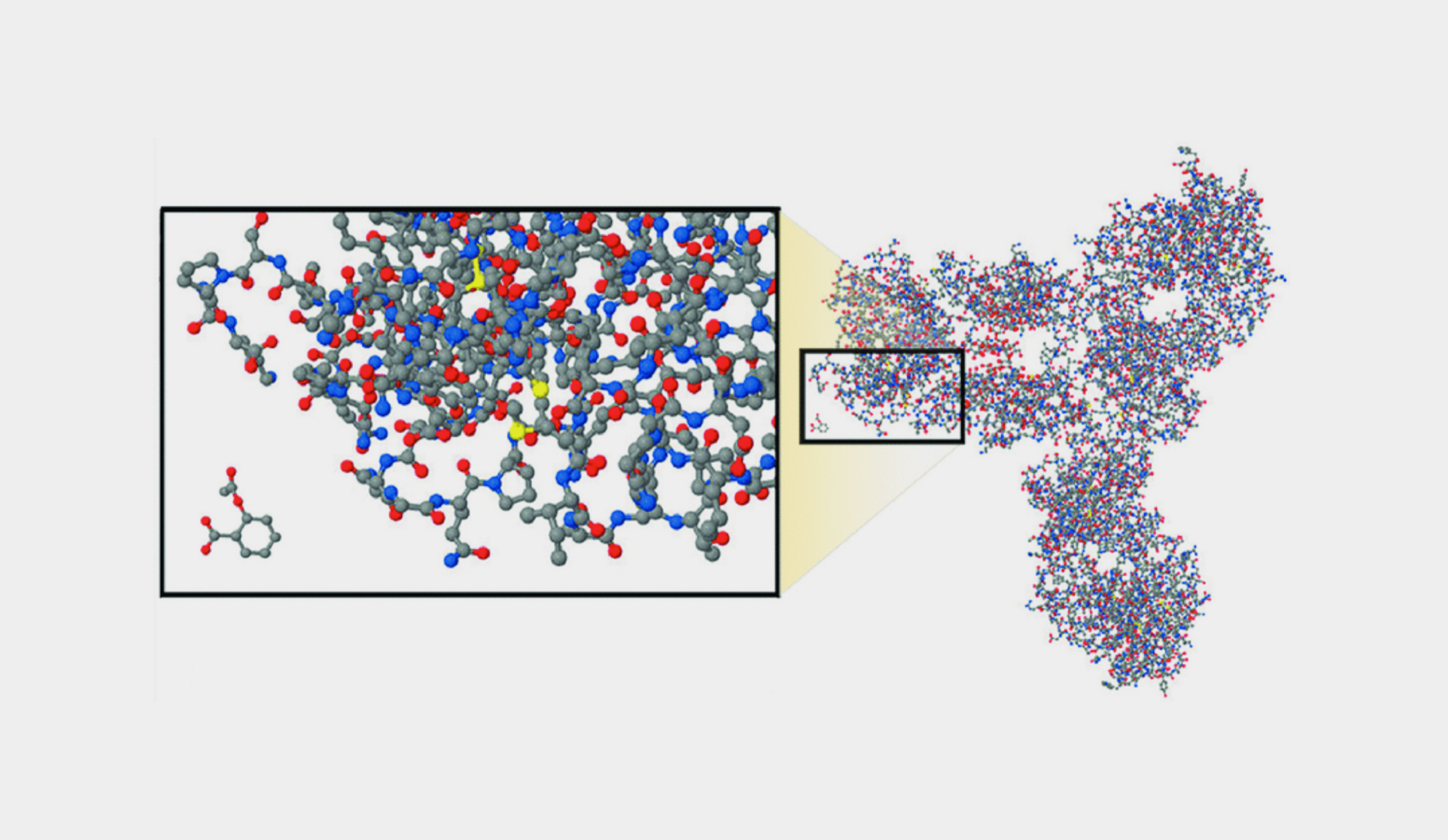 This is where quantum computers can shine. Quantum computers utilise superposition, entanglement, and interference to solve certain problems – including chemistry and machine learning – far faster than a classical computer ever could. First suggested by physicist Richard Feynman in 1981, there are now at least one hundred operational quantum computers built by corporations including Honeywell, IBM, and Google, as well as those developed by startups and academic institutions.

Today’s quantum computers are known as ‘Noisy Intermediate Scale Quantum’ (NISQ) and still have limited computing power. Nonetheless they are able to assist in the first stage of drug discovery involving molecular simulation, wave function optimisation, and machine learning. Even a small increase in simulation accuracy could result in more accurate predictions of viable drugs long before clinical trials, and so reducing time and money.

Simulating molecular interactions is very difficult. A number of computational tools have been developed but there remains a tradeoff between accuracy and speed: forcefields are quick but offer only the most broadstroke answers, whereas the exact solutions scale factorially as O(n!), n being the number of electrons. This increases so quickly that current supercomputers can only exactly simulate around 20 electrons. The O(n³) compromise in Density Functional Theory and Hartree-Fock is usually employed but even this severely limits the number of atoms which can be simulated accurately and is nowhere near powerful enough to simulate biologics to chemical accuracy, for example. 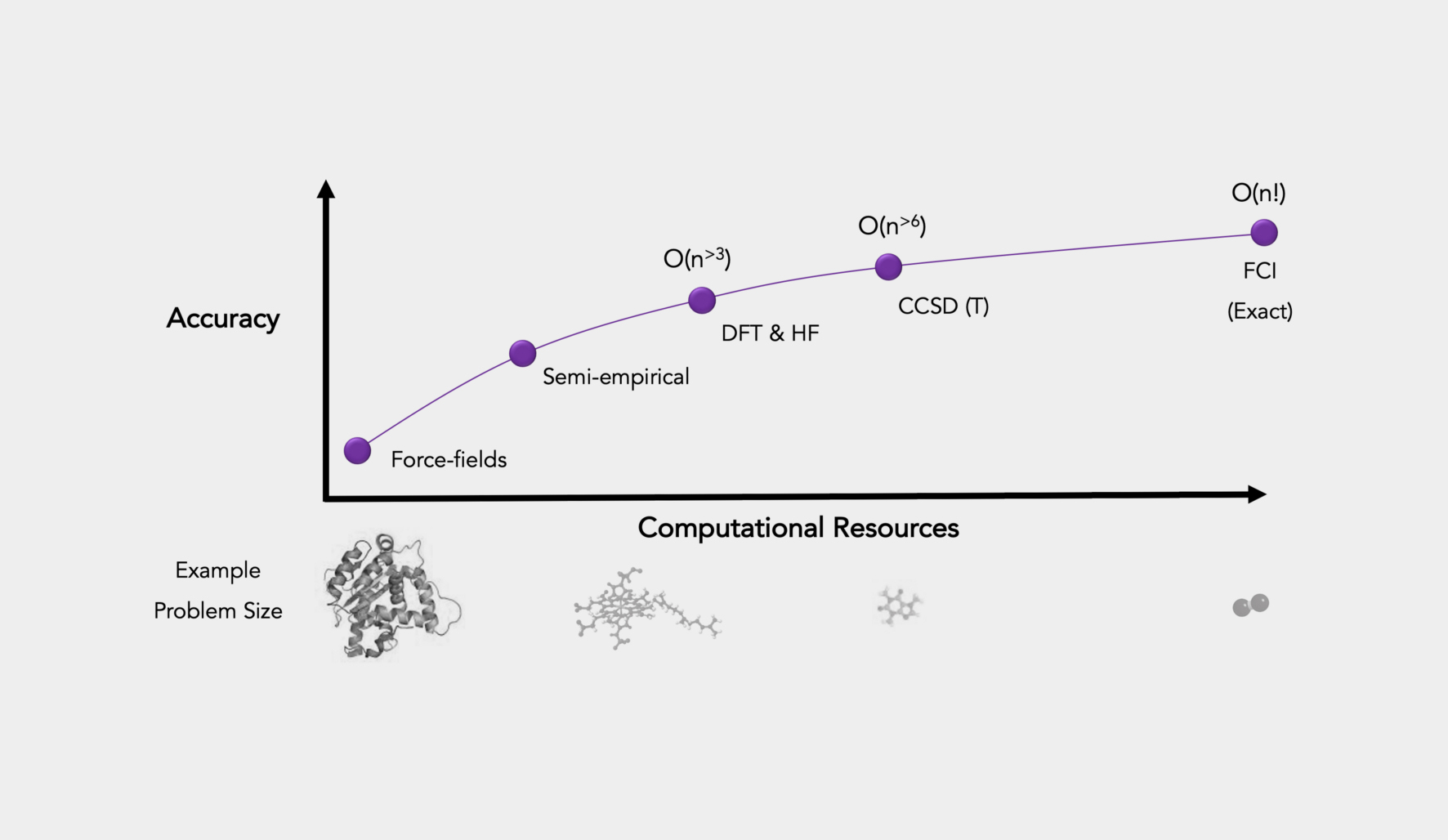 To illustrate this limitation, consider a caffeine molecule with 24 atoms. Simulating this to chemical accuracy using conventional means would require a computer 1–10% the size of the earth: theoretically possible but hardly feasible. To simulate the larger penicillin molecule stretches the requirement even further to a computer the size of the observable universe. In contrast, the quantum computing requirements are very modest: at least 160 qubits for caffeine and 286 qubits for penicillin.

Consider the following example illustrating the importance of organic synthesis. A critical chemical problem which could be solved with such increased computational power is simulating the FeMoco active site of nitrogenase (M. Reiher et al. and J. Lee et al.). This enzyme accomplishes the remarkable transformation of dinitrogen into two ammonia molecules under ambient conditions. Whereas the industrial Haber–Bosch catalyst requires high temperature and pressure and is therefore energy-intensive, the active site of Mo-dependent nitrogenase, the iron molybdenum cofactor (FeMoco), can split the dinitrogen triple bond at room temperature and standard pressure. Improvements in theoretical tools have substantially decreased the requirements needed to perform such a simulation: in 2017 it was estimated this would require 200 million physical qubits at a 10⁻³ error rate calculating over a period of months. By 2020 this had been reduced to 4 million physical qubits calculating for just 4 days. 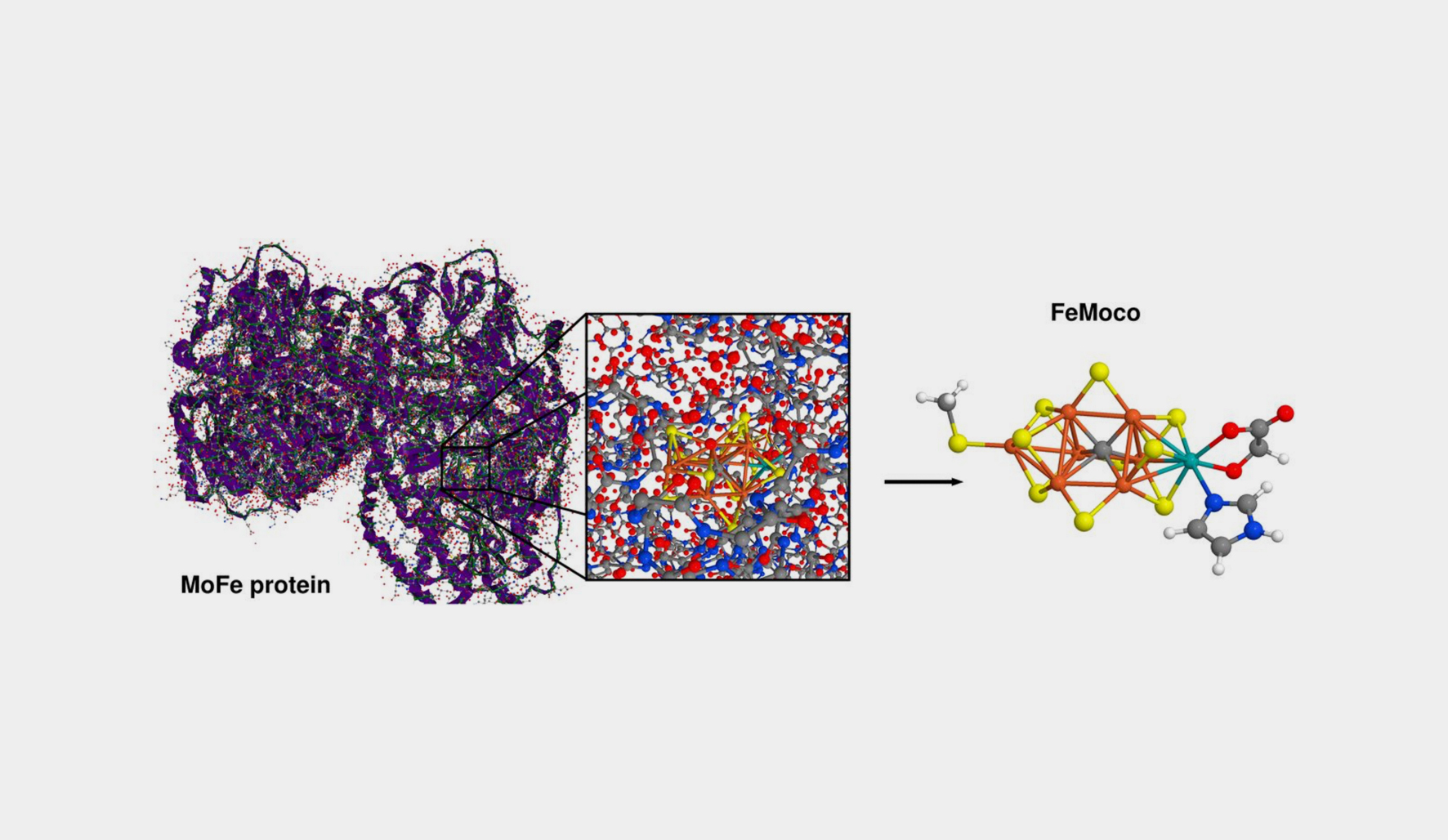 Progress in Quantum Software and Hardware

Quantum chemical simulations have witnessed extraordinary progress over the past few years. In 2017 IBM modeled the H₂, LiH and BeH₂ molecules using 6 qubits (A. Kandala et al.). Since then the size and complexity of molecules has increased substantially, whilst the number of qubits required has decreased (V.E. Elfving et al. and Y. Kawashima et al.). There are also several new theoretical tools developed to perform the simulations: VQE and similar variational methods have been enhanced with more sophisticated state preparation methods and measurement reduction techniques. 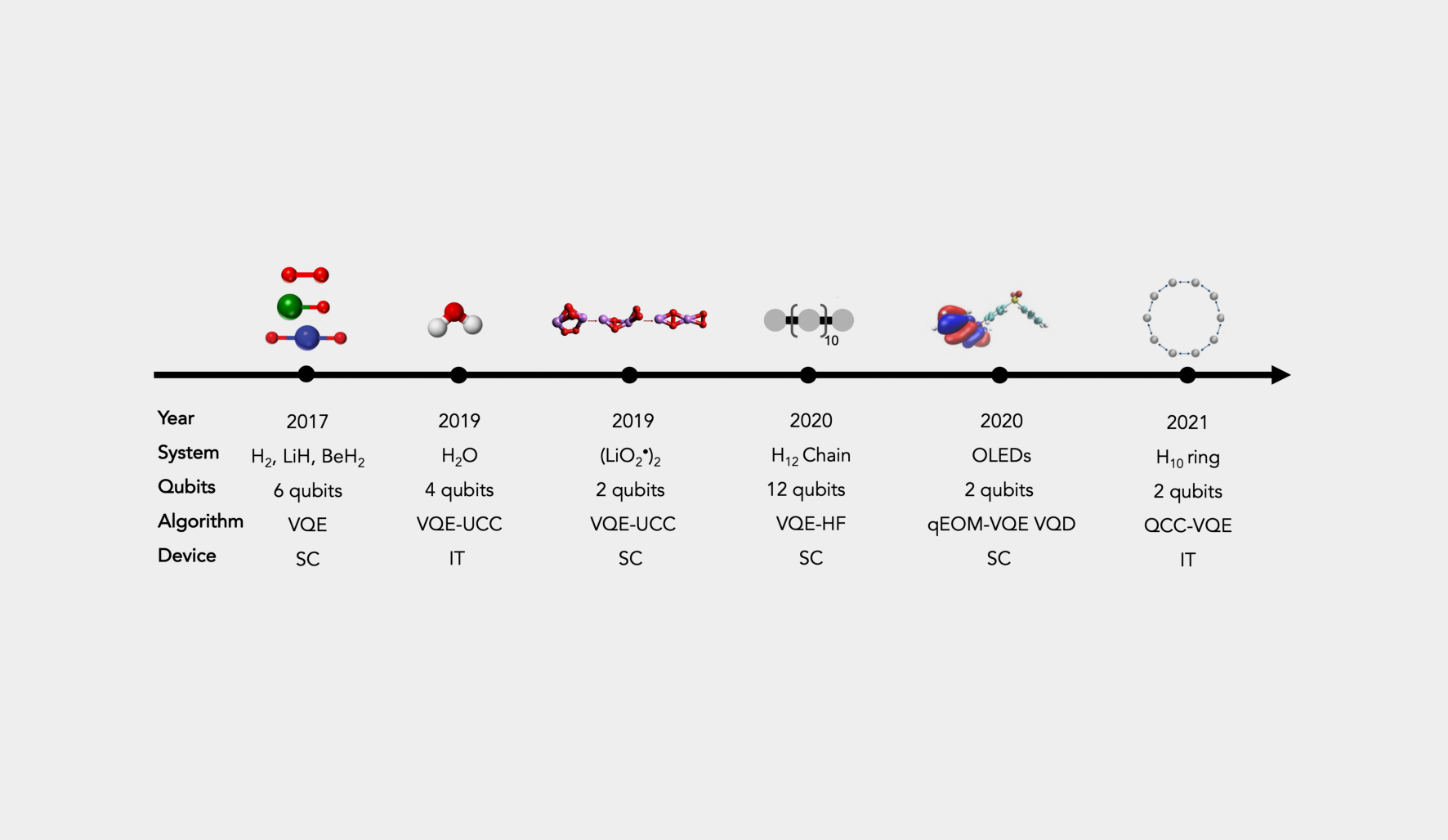 Cambridge Quantum is a private, UK-based company entirely dedicated to developing quantum applications. Foremost among these are EUMEN, the most commercially-developed quantum chemistry application in the field. Incorporating about 20 features to compute specific quantities of interest, we have most recently applied this toward Alzheimer’s drug research in collaboration with Roche (D. Manrique et al.). In collaboration with CrownBio/JSR Life Sciences, we have also developed a quantum machine learning application to derive insight from the analysis of genetic data to identify cancer treatment biomarkers and drive the next generation of bioinformatics. 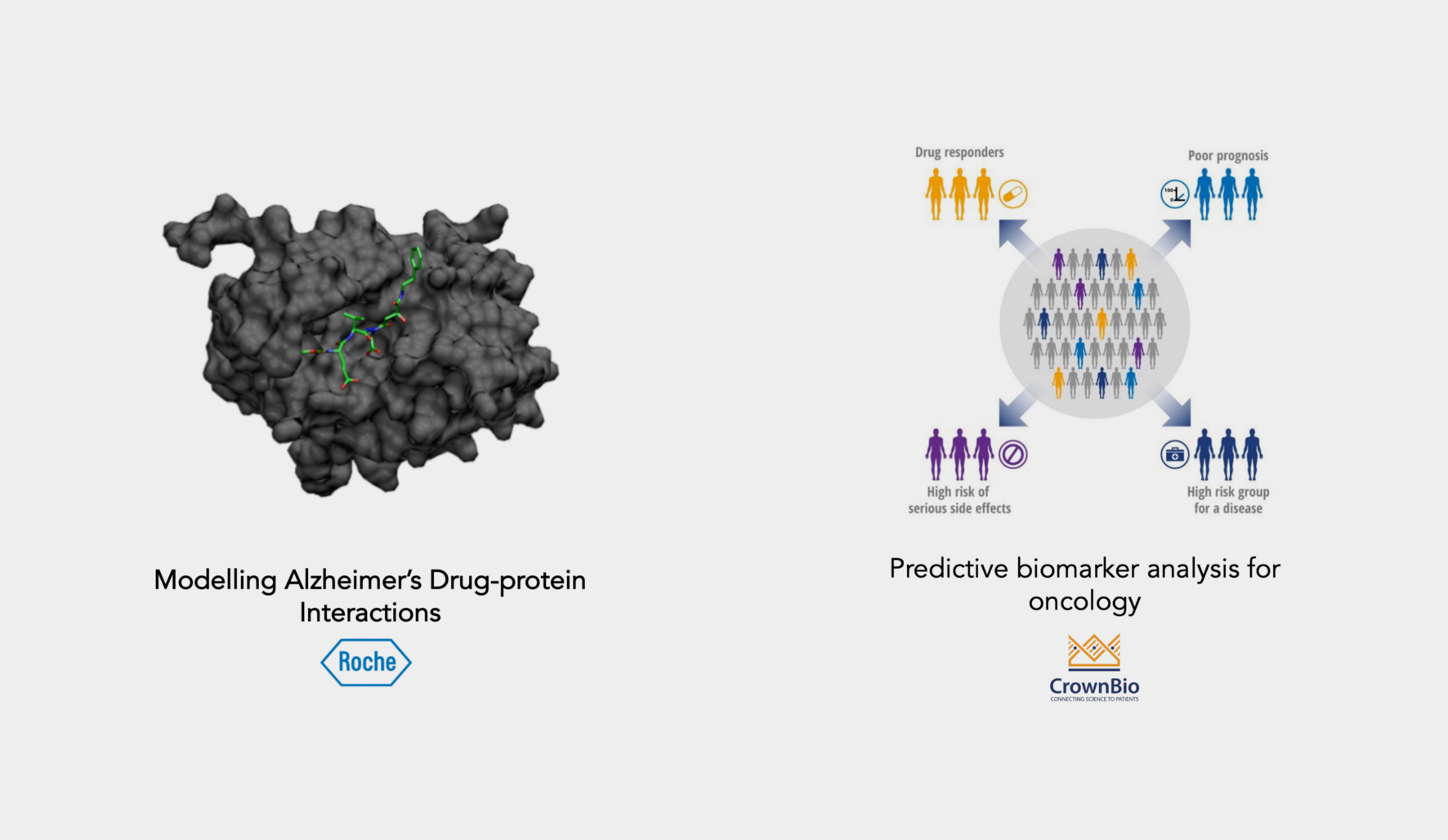 Cambridge Quantum’s scientists regularly post on Medium, a hub for social journalism and a hybrid of publications, blogs and publishers.
Follow us there for more of our news and updates.